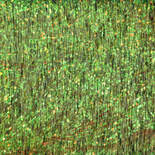 HĪBER is a an exploration of texture and darkness where core serves as a common thread. The title itself is a word stem referring to hībernus, meaning wintry, of or pertaining to winter or suitable for getting through winter. I wanted HĪBER to boast the idea of winter lasting longer than a semester. HĪBER also refers to hibernation, portraying both the process and the content of the album itself.

HĪBER is divided in eight parts for double bass and electronics. Each piece is approached with various possible definitions and angles.

I. SUĪ
SUĪ can refer to each other, one another, him/her/it/oneself. It can also be placed with other word cores as in suīcīdium (e. suicide).
II. VĒXŌ
VĒXŌ simply means ‘I shake’, but the movement itself also portrays a general quake.
III. no afterlife thanks
This explains itself.
IV. her palms faced down forever after
Since HĪBER deals with the concept of hibernation, I wanted to include this movement about a certain sleep motion/pattern. Shortly after I started to work on HĪBER, there was a turning point in my life where I suddenly was no longer able to sleep with my palms facing up. My palms are still facing down as a matter of fact (it seems to have become a habit/addiction), something I connect to defence mechanism, but also something closed, suffocating, stressful, or even warm and secure.
V. tvíhirta
The word ‘tvíhirta’ may sound Icelandic, but it is sort of a made up word. Tví meaning ‘two of something’ and hirta reminding of ‘hjarta’ (heart). Somehow I also relate hirta to ‘flétta’ (braid), which does not really make much sense at all, but is important to understand the content of the movement itself. ’Tvíhirta’ deals with the concept of an organism having two hearts, but perhaps not naturally. Tvíhirta is spun out of the thoughts on a body being (even unwillingly) given an extra heart with a somewhat horrific transplant.
VI. cusp day
What does a cusp sound like? Cusp day is based on the idea of a cusp or void, and if such concepts really exists (and not in a man-made way). Cusp day is about a condition of a being in between things, or perhaps not between anything at all.
VII. GRAVIS
GRAVIS refers to something heavy, serious, troublesome or hard.
VIII. fists clenched
Although sounding aggressive (and it certainly is), fists clenched is also the second movement of the album that deals with a concept of sleep motion/pattern. Around the time that certain palms started to face down, the same hands would sometimes take the form of clenched fists, to their owner’s great displeasure. Fists clenched also refers to something direct and free of fear, even proceeding.


HĪBER was mixed by Skúli Sverrisson and released by Dacapo Records.